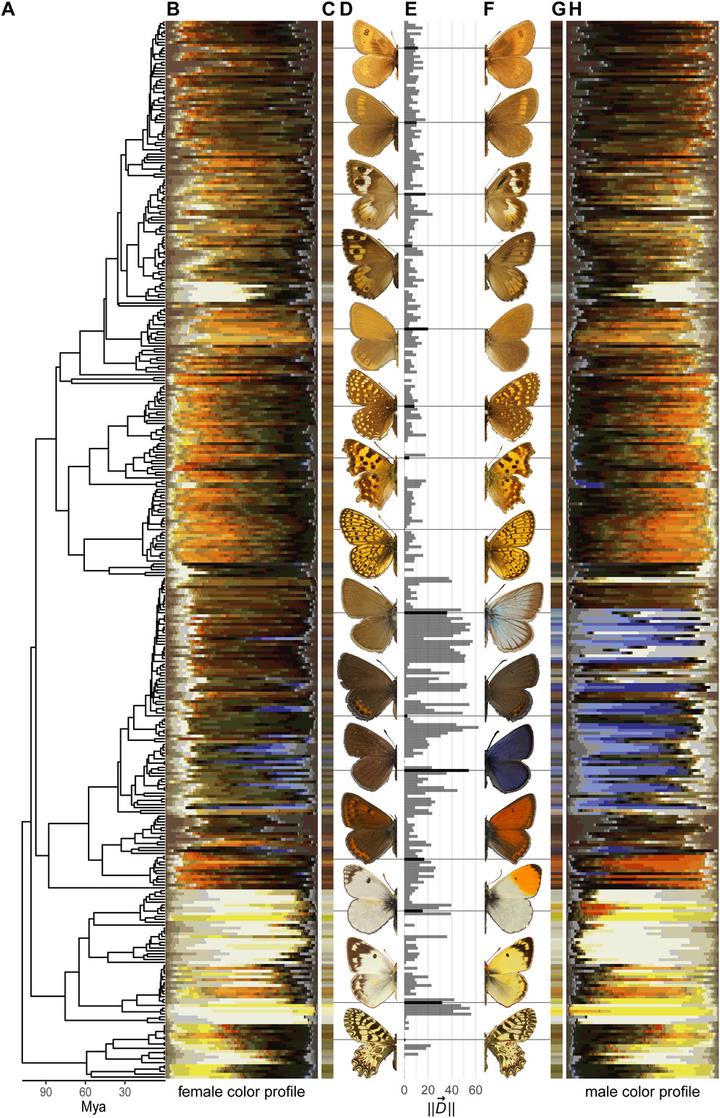 Sexual dimorphism is typically thought to result from sexual selection for elaborated male traits, as proposed by Darwin. However, natural selection could reduce expression of elaborated traits in females, as proposed by Wallace. Darwin and Wallace debated the origins of dichromatism in birds and butterflies, and although evidence in birds is roughly equal, if not in favor of Wallace’s model, butterflies lack a similar scale of study. Here, we present a large-scale comparative phylogenetic analysis of the evolution of butterfly coloration, using all European non-hesperiid butterfly species (n = 369). We modeled evolutionary changes in coloration for each species and sex along their phylogeny, thereby estimating the rate and direction of evolution in three-dimensional color space using a novel implementation of phylogenetic ridge regression. We show that male coloration evolved faster than female coloration, especially in strongly dichromatic clades, with male contribution to changes in dichromatism roughly twice that of females. These patterns are consistent with a classic Darwinian model of dichromatism via sexual selection on male coloration, suggesting this model was the dominant driver of dichromatism in European butterflies.

I wrote an accessible summary for the Evolution Letters blog.

Males and females of many species are dimorphic; there are differences in the way the sexes look and function. One of the most studied types of dimorphism is dichromatism, where males and females have different colors. It is often assumed that sexual selection is important to dichromatism, as choosy females often mate with colorful males. At the same time, natural selection by predators against elaborated colors can especially be strong for females, as they may need to carry eggs or provide maternal care making them more vulnerable. For as long as we have known about natural and sexual selection, however, it has been debated which of these two forces initially creates dichromatism. Charles Darwin argued that sexual selection drives male color away from female color, whereas contemporary Alfred Russel Wallace instead thought that natural selection pulled female color away from the male’s. Here, we revisit this debate using butterflies, one of the taxa Darwin and Wallace argued over, to determine whether Darwin’s or Wallace’s model is more important in the evolution of dichromatism. We used drawings from a field guide to quantify the color difference between males and females of all European non-hesperiid butterfly species, and modeled how their colors have evolved over time. We show that the color of males generally evolves faster than that of females. By using the direction of male and female color evolution along the phylogeny, we also determined that changes in male color are around twice as important to dichromatism evolution than changes in female color. These results show that directional selection on males, likely due to sexual selection, is the main driver of dichromatism in butterflies. This supports Darwin’s, but not Wallace’s, model of dichromatism evolution, resolving a 150-year-old argument.